We fly from Copenhagen to the far western shores of Norway to visit the charming seaside town of Bergen, which is located at the head of a long natural inlet on a picturesque harbor lined with historic buildings, and surrounded by seven mountains. 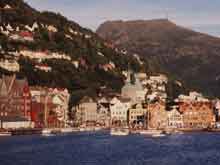 We arrive in the morning, check in to our hotel, then enjoy a brief orientation walk followed by lunch and a big afternoon. During the summer there is a very late and long twilight, with sunset stretching on for an hour and finally getting dark about 11 pm, making the evening a great time for being out and about, having a look at the people and diverse neighborhoods of this city. Bergen is the second biggest city in Norway with a population of about 250,00 people, and in typical European style, the downtown is quite lively and filled with shops, cafes, restaurants and pedestrian streets.

The plan: walking tour of town center and the outdoor food market on the harbor; visit to the historic Brygen; and ride up the mountain by funicular to get a great view over the city. Our walking tour will have a look at downtown and some of the quiet residential neighborhoods. 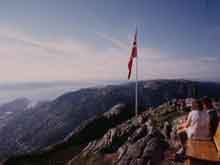 A short walk to the edge of town brings you to the funicular which takes you up the Floyen Mountain for a marvelous view across the city from a 1000-foot high observation perch. The ride just takes eight minutes, making this an easy excursion. At the top you get a spectacular view of the town of Bergen and the harbor, making a nice way to start the day. You can spot various attractions from up here and visually plot out where you want to walk to later in the day, showing some idea of how far things are from each other. You'll see: the University Museum; Brygen Museum; a park in the midst of downtown; the harbor and adjacent food marketplace; the network of downtown streets, and much more. At the top there is a series of nature trails if you really want to get into it. When you are finished you might consider walking down the attractive path through the woods for a nature hike that provides beautiful scenery along with some exercise.

There are many fine sites to see in town that will keep you quite busy and entertained. One of the fun activities is a visit to the colorful open-air food market at the harbor, especially busy in the summertime, rich with fresh produce, fish and meat. They have fruits and sandwiches to go as well so you can pick up a relatively inexpensive lunch, or just get a light bite while browsing around. 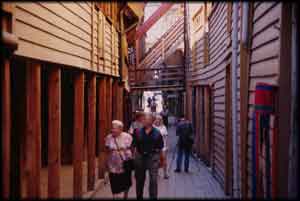 The most impressive historic site in Bergen is the large collection of wooden buildings known as the Brygen, constructed about 300 years ago. These wooden buildings are so important they are on the UNESCO list of world heritage sites. The Brygen was the main residences, offices, shops and warehouses of this thriving town, which was one of the important cities of the Hanseatic League, the major trading network of Northern Europe. The buildings are open as a living museum, with guides in period costumes who walk you through it and explain the fascinating history. The tour brings you into three separate museums in this building complex, filled with original artifacts and structures that reveal the daily life of these early merchants, sailors and fishermen. 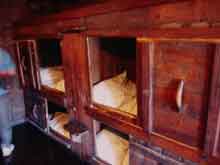 As you will discover, the Brygen is more than just a facade of shop fronts -- it's an entire historic neighborhood connected by wooden alleyways with restaurants, more shops. The museum was created on the spot about 20 years ago after a fire burned out several structures. Archaeologists came in after the fire and did some important excavations that discovered the earliest foundations of house sites which gave clues into the daily life of the people who lived here hundreds of years ago. After touring the historic displays leave time for exploring the shops sprinkled throughout this complex, many with specialty items of Norway. 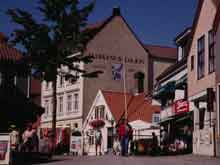 In the hillside behind the Brygen you can wander through a residential neighborhood that developed hundreds of years ago before there were any automobiles, so as as a result you have narrow, quiet lanes that are for pedestrians, making a peaceful place to stroll. Bergen is worth exploring just to browse around the old streets and alleyways, which can be a most satisfying experience. The small wooden houses lying higgledy-piggledy, cobblestone step ways climb steeply and the passion for flowers is all around. You'll find he occasional shop in the middle of this residential district as well. 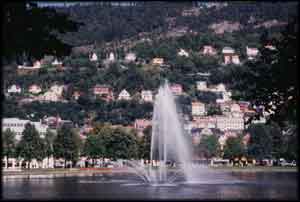 It's a charming spot that has been beautifully preserved. There are little gardens in front of immaculate houses, with little alley ways you can walk through -- very charming and picturesque. This neighborhood is very close to the shopping area, only about five blocks away from the busy downtown streets that have buses and cars and stores and outdoor markets, but here in this residential quarter there is an entirely different atmosphere of a quiet, peaceful, calm. You can come up here in the morning or afternoon to have a stroll, and you'll see very few cars in these narrow lanes. It's a queit neighborhood for local residents. 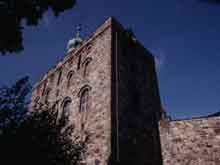 An outstanding visit is to nearby Bergenhus fortress, the castle at the mouth of the harbor with some buildings dating back to the 1240s, when it was first constructed as the main fortified home of Norway's rulers. If you explore it you'll see their grand meeting hall and other rooms with historic displays of furnishings, costumes and weapons. You will learn that 600 years ago Bergen was densely populated, the largest city in Norway and capital of the country. Two of the main buildings in the fort are Rosenkrantz Tower and Haakon's Hall, the royal chamber built around 1260, which is the largest non-religious medieval building still standing in Norway. The castle basement is vaulted in a medieval style to prevent fire and to hold up the floor of the banquet hall above it. This complex is still used today for ceremonial events and concerts. 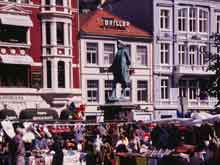 Just a few blocks away is the oldest building in Bergen, St. Mary's Church, which dates back to the 12th century. It's a rare example of the Romanesque architecture and therefore, it's really one of the most important and historic buildings in the entire country. It's been rebuilt over the years and renovated and redecorated, but you can still see the basic Romanesque structure with the walls around it vaulted arches and a very small windows. It's been in continuous use ever since. 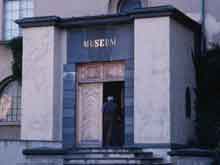 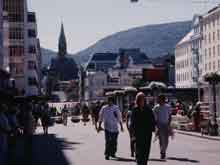 You will have plenty of time to enjoy the downtown square at the heart of Bergen because this is where our hotel is situated. There are many modern buildings of course throughout town, and there are extensive parklands beyond the city as well as a large park in the middle of town surrounded by green lawns with a big fountain in the middle. Of course the city hosts a number of great restaurants, many emphasizing the local delights of fish and potatoes, along with varied vegetables and all your standard European items. In the summer it is mild enough to eat outdoors for lunch or dinner, so you will find many restaurants with sidewalk tables.

Next day we travel to Oslo, capital of Norway. To get there we're going by boat through a vast fjord, and then take you on one of the most spectacular train rides in all of Europe, cross-country through some fascinating mountain terrain, passing lakes and rivers and waterfalls.

Leaving from the dock in downtown Bergen, we continue a few hours by boat through the Sognefjord, the longest and most dramatic fjord in Norway, framed by steep sea cliffs rising thousands of feet. This area is one of the world's most beautiful travel destinations and is included as a UNESCO World Heritage Site. This will be a day of dramatic scenery all around during the boat ride, with the mountains towering high above on both sides of this chasm. 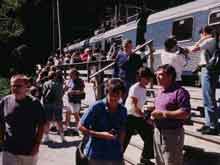 After the spectacular boat ride we board the Flam railway which takes us from the fjord up steep tracks past seven lush mountains. The Flam Railway is one of the most scenic rides in Europe and fortunately stops now and then to let passengers get off the train to enjoy the view. The most spectacular sight is a rolling gushing waterfall -- a terrific photo opportunity but wipe the water off of your lens -- it is like being on the maid of the mist at Niagara Falls with a big spray coming at you. We soon reach a rail junction and transfer trains for another scenic ride.

It's always a pleasure to travel by train. Among the many advantages: You have wonderful scenery out the windows; don't have to worry about driving on getting stuck in traffic; not crammed in like on a bus; you can walk around in the train, kick back and read a book or take a nap; visit the snack car and have some coffee or a complete meal, like a coffee shop on wheels. The train is a lovely setting for conversation and meeting some Scandinavians. Nobody's in a rush at this point, so it's an interesting place to meet local people. 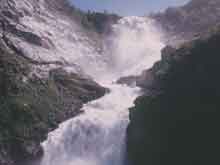 The scenery keeps getting more spectacular as we climb through the central regions of Norway, looking much like Switzerland with tall mountains in the distance and glaciers, with lakes where the water is clear blue color. The visual feast is like a natural painting with trees and bushes along the edge of the water, lovely grasses and shrubs and wonderful colorful elements of nature beyond our windows. The alpine rail journey along Norway's high plateau presents several hours of Alpine wonders, with fine views of glaciers, lakes, tundra and evergreen forests along the entire route, enjoyed in the comforts of our modern train. Late afternoon arrival in Oslo and transfer to our hotel.