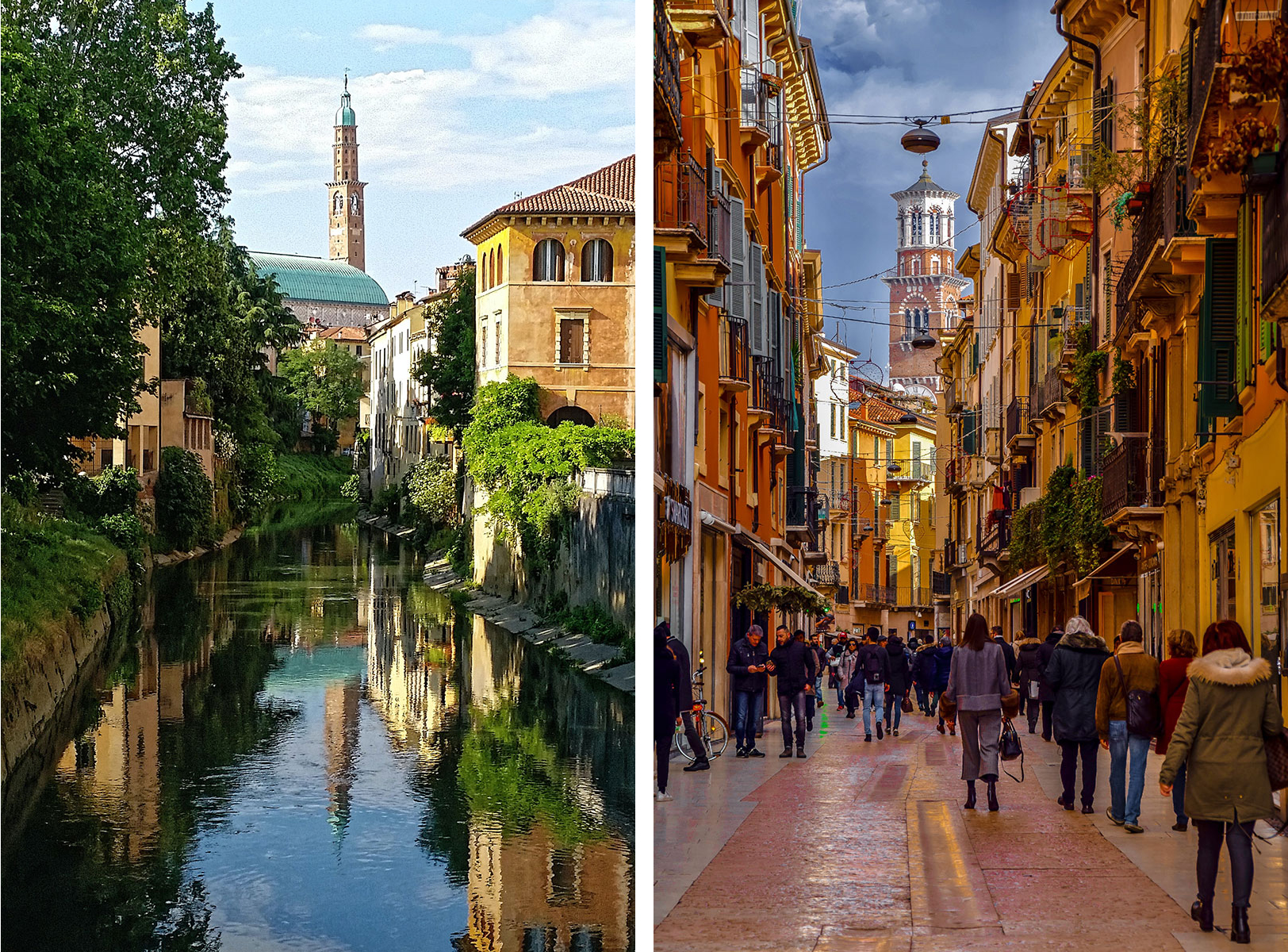 The entire city of Verona is truly spectacular. The first obligatory stop is the Arena, the imposing Roman amphitheater located in the lively, bustling Piazza Bra Square, one of the most dynamic squares in Verona. It is one of the largest amphitheaters in Italy; its elliptical shape produces perfect acoustics from any standpoint and allows it to accommodate a large number of spectators. Built in the first half of the 1st century A.D., in the period which marked the end of the Augustus’s Empire and the beginning of Claudius.

Originally constructed to host gladiator combats, the amphitheater saw a long period of abandonment before it returned to the limelight with a new form of entertainment, in 1913: after having hosted the premiere of Aida in that year, it has been known around the world for the sounds of opera that emanate from its stage, in addition to hosting concerts and theatre performances.

You can admire the ancient city walls all around you, along with the Palazzo della Gran Guardia and the nineteenth century Palazzo Barbieri. The Liston opens up on the north side of the piazza (the wide stone pavement, a traditional passage for the Veronesi), from which you can continue on to Via Mazzini, which is always packed with shopping lovers. 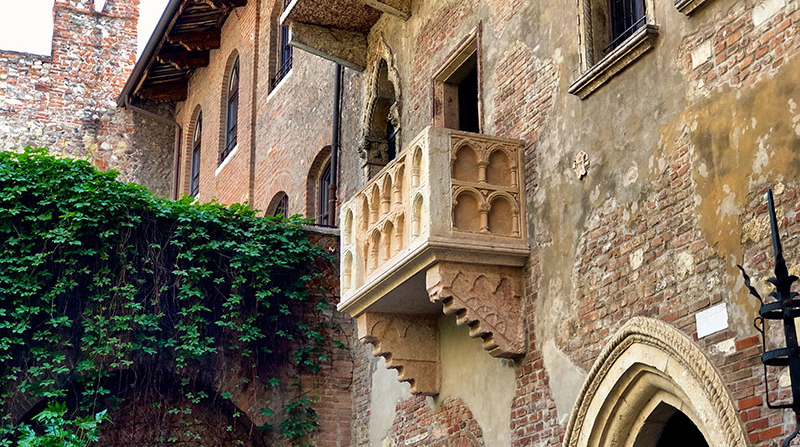 From here you cross Via Cappello where, according to the legend, Juliet’s house is located with her famous balcony. Verona of Shakespeare and the “star-crossed lovers” is legend all over the world, and lives indefinitely through the places made famous in the play, Romeo and Juliet. The Bard rendered it the immortal story that it is today, allowing Verona to rest as one of the most admired and visited places in the world. 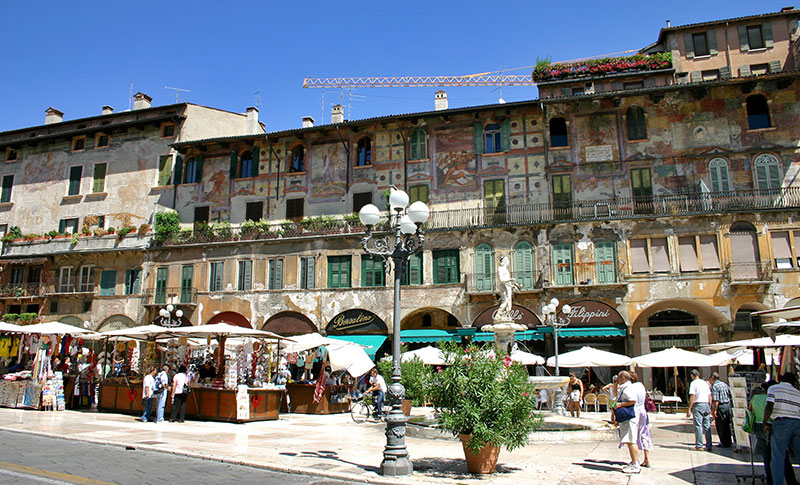 Via Cappello also leads to the evocative Piazza delle Erbe, the city’s commercial hub, where the original Roman Forum was located. Here you will find the market column, the fountain of Madonna Verona and the column of San Marco, which had a lion hoisted on top of it as a symbol of the Republic of Venice. 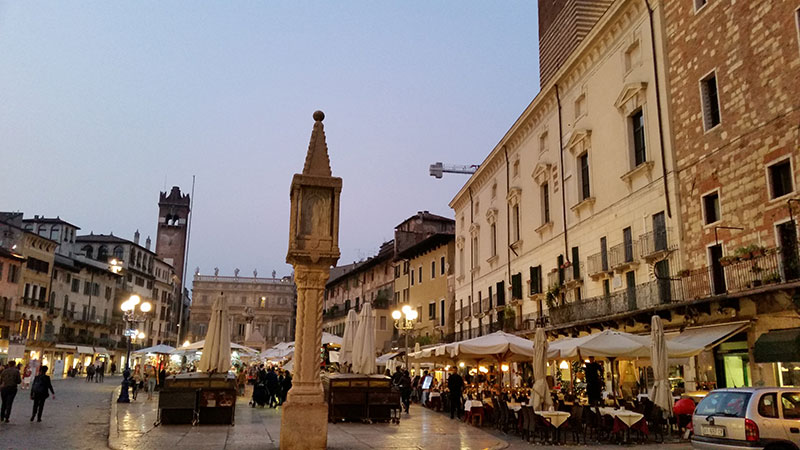 The square is framed by palaces and buildings that have marked the history of Verona: the Domus Mercatorum, Torre del Gardello and the Palazzo Maffei. To the right of the square are the sixteenth-century houses of the Mazzanti, connected by a portico.

From Piazza delle Erbe, Via dalla Costa takes you to Piazza dei Signori - which sits under the dominating Lamberti Towers - the portico of the Loggia del Consiglio catches the eye; it is here where 16th-Century political life took place, while the Palazzo di Cansignorio and Palazzo del Comune (or della Ragione) were the seats of military, judicial and administrative power. A statue of Dante, the father of the Italian language, is located there. 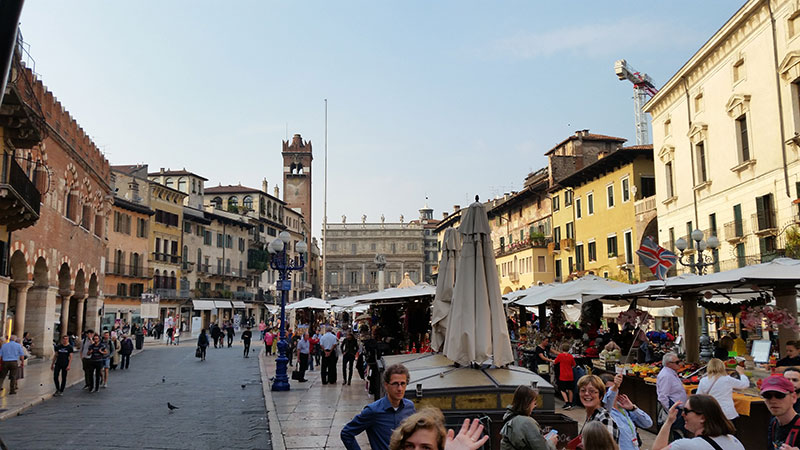 The piazza is enhanced by palaces of great historical and architectural importance, such as the Loggia of the Council, the Palace of the Government and the Domus Nova. The piazza also leads to Torre dei Lamberti, and is overlooked by Palazzo della Ragione, now the home of the “A. Forti” Modern Art Gallery.

Near the church of Santa Maria Antica, past the arch between the Cangrande and Capitanio palaces, you will find the Arche Scaligere, or Scaliger Tombs (a monumental funerary complex in Gothic style that hosts the final resting place of the Lords of Verona). The tombs are enclosed by a wrought iron fence, with exquisite decorations featuring the symbol of the Scaliger. 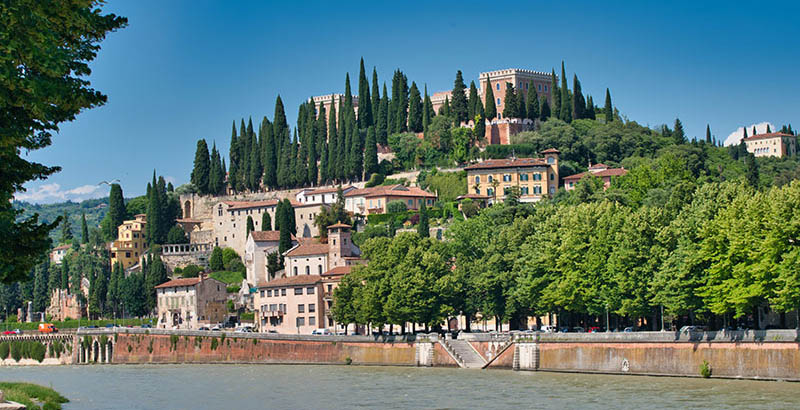 The path continues towards the church of Sant’Anastasia, a splendid example of Italian gothic architecture, inside which you can admire “S. Giorgio and the Princess”, a beautiful fresco by Pisanello (1433-38). Also nearby are Ponte Pietra (the only remaining bridge from Roman times), the Teatro Romano and the Duomo (originally from the eighth and ninth centuries but rebuilt in Romanesque style after the earthquake of 1117). From here, you can follow Corso Sant’Anastasia and pass back through Piazza Erbe to get to Corsro Porta Borsari, which served as the Decumano Massimo (the main east-west street) in Roman times, and was named after the gate located there (in the first century A.D.). Walking along the elegant Corso Cavour you can many splendid palaces, including Palazzo Canossa (on our left) and Palazzo Bevilacqua (on the opposite side), both by the architect Michele Sanmicheli. 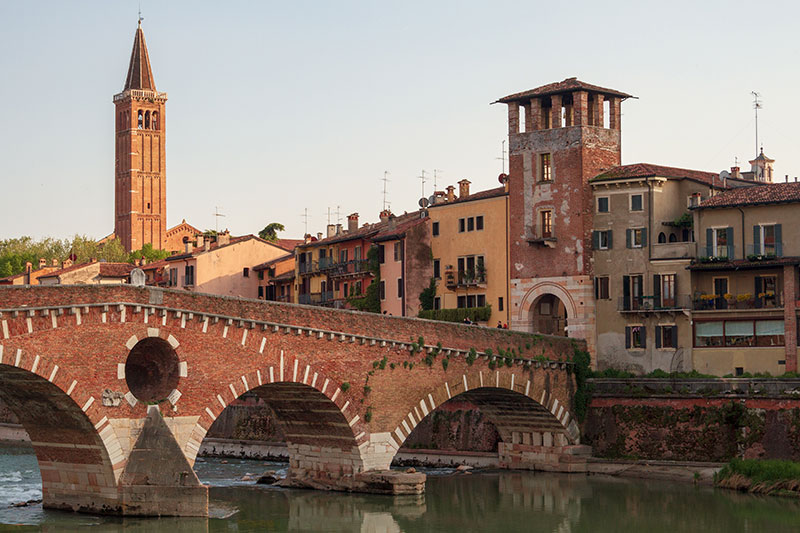 The tour continues with Corso Castelvecchio, where the Arco dei Gavi has stood since the first century A.D. (a rare example of an honorary arch dedicated to private citizens). We then come to Castelvecchio, the imposing symbol of Scaliger-era Verona, built by Cangrande II della Scala in the second half of 1300 and recently restored by the architect Carlo Scarpa.

You cannot miss out on the basilica of S. Zeno, located in the immediate vicinity, which represents a fascinating example of Romanesque architecture (eighth-ninth century) with its beautiful rose window (called “Wheel of Fortune”). It is also home to the famous triptych by Mantegna depicting the Madonna with Child and Saints.

If you want to admire the city of Verona from a different point of view don’t miss to climb up to Castel San Pietro with the funicular, whose departure station is near the Roman Theatre. From the wonderful panoramic terrace you can decide whether to come back by funicular or to go down the stairs on the side of the theatre.

A LITTLE BIT OF HISTORY...

With over two millennia of history, Verona is currently the second city in Veneto in terms of the liveliness and consistency of its economic activities, and is also a popular international tourist destination.

Benefitting from its geographic location, it was probably home to a Rhaetian-Etruscan and Euganean town, but the first certain information dates back to the fourth century B.C. 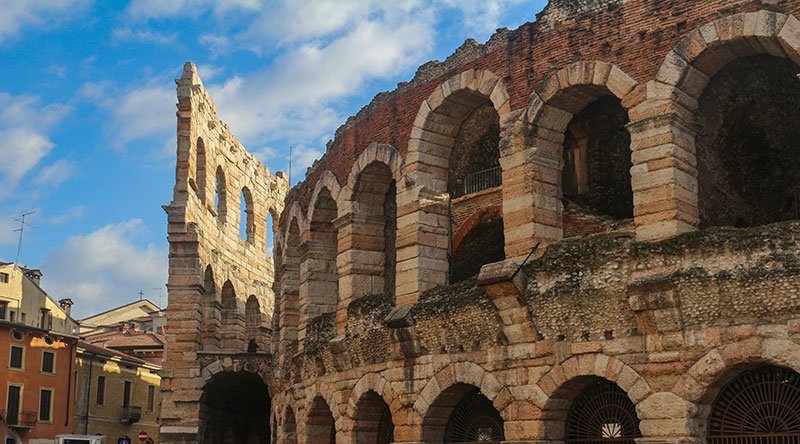 It was a major political and commercial hub in Roman times (starting from the first century B.C.), and impressive traces of this legacy still remain, such as the famous Arena, the symbol of the city. In addition, it was also the capital of the Lombard Kingdom before Pavia.

Invaded and occupied for a significant length of time by the Barbarians, in the twelfth century, Verona’s history was marked by the foundation of the Free Comumne, an event that gave the city a new urban shape. Subsequently, in the second half of the thirteenth century, the city came to be dominated by the rule of the Scaliger, which retained its control over the territory of Verona until 1387. 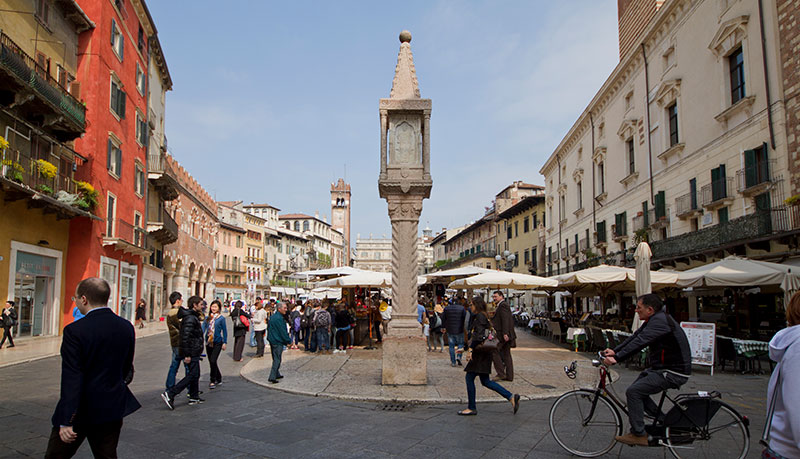 After a brief period under the Signoria of the Visconti and then of the Carraresi, power passed into the hands of the Republic of Venice, to which Verona was spontaneously delivered in 1405. The Serenissima led the city until 1796, when the territory was invaded by Napoleonic troops, which the Austro-Hungarian empire contested to gain hegemonic rule until 1815. After the Congress of Vienna, Verona was definitively ceded to Austria, which continued to control the city until 1866, when Verona was annexed to the newly formed Kingdom of Italy.