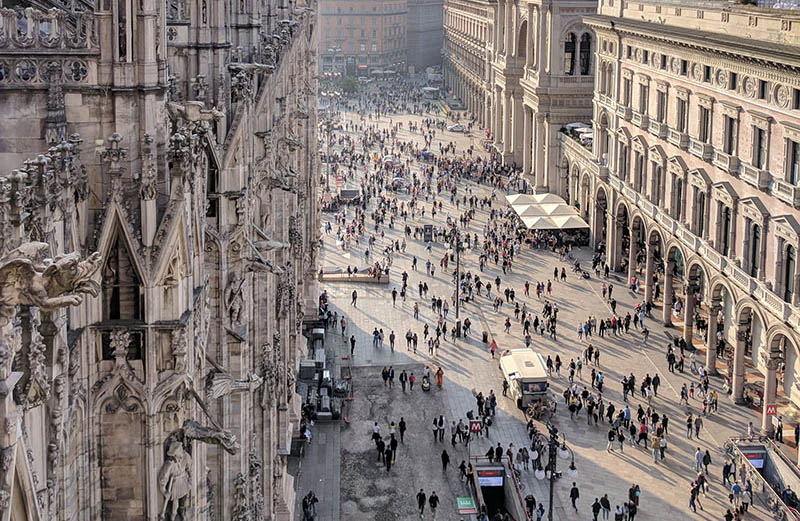 The Duomo, the Cathedral at the heart of the city, is an architectural masterpiece that remains imprinted in the memory of all those who visit Milano.  Built between 1386 and 1877, it is the fifth-largest cathedral in the world and the largest and  most important example of Gothic architecture in Italy.

The thousands of intricately carved spires and statues, like a marble forest, are an awesome sight for those exiting the Metro or arriving from Galleria Vittorio Emanuele. It is not surprising to learn that its construction, which began in 1386 and lasted almost half a millennium, was commissioned by the Duke of Milano Gian Galeazzo Visconti as a symbol of the glory and grandeur of the city. The statues surrounding the altar were already in place before Christopher Columbus discovered America, and ancient remains located under the parvis of the church are over a thousand years old. 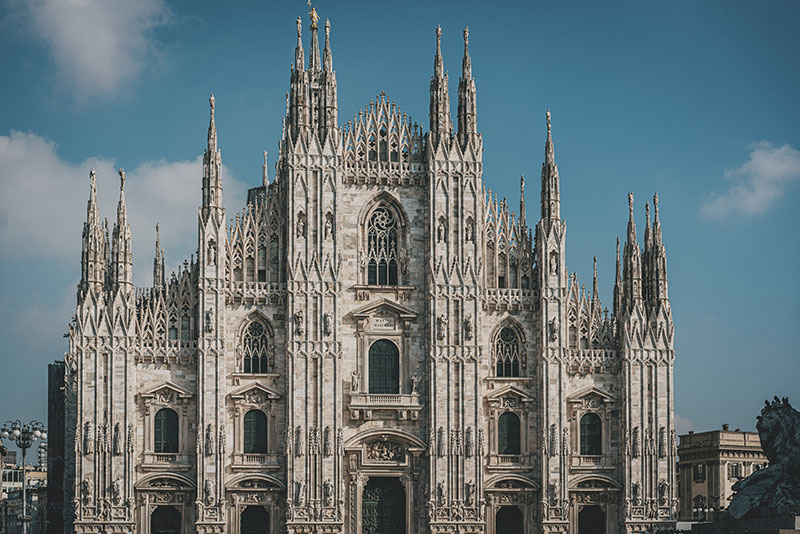 Made of pink-hued white marble from a dedicated quarry, it is 157 meters in length and 108.5 meters high at the top of the main spire, where rests the glistening golden statue of the Madonnina, an evocative symbol much-loved both by all Milanese and visitors. A visit up to the rooftop terraces is highly recommended to admire the unmissable panorama of the city and the mountains in the distance.

You may walk beneath the ancient vaults to have a look around, but you will also find yourself looking upwards in awe, as the Duomo is the only church in the world that has sky-high statues on the pinnacles of its columns. 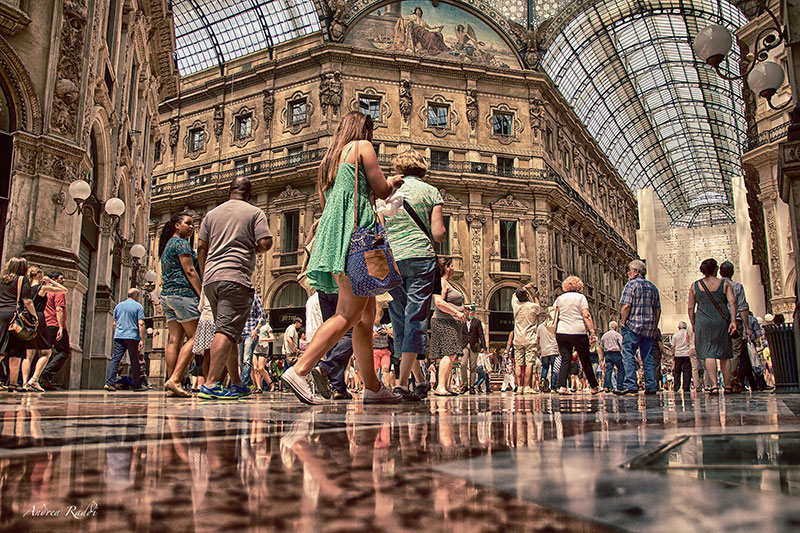 The Duomo is at the very heart of the city, surrounded by many landmarks, especially Galleria Vittorio Emanuele II.  The Galleria is Italy’s oldest shopping mall, built  between 1865 and 1877 and - beautifully embellished with mosaics and caryatids around windows and balconies - it has maintained its lustre. The arcade’s luxury brand shops, that could easily compete with those in Via Montenapoleone or Via della Spiga, are juxtaposed with the classic white-tablecloth restaurants, the celebrity chefs’ eateries, legendary venues like the Camparino bar and the iconic Bocca art bookstore, based in the Galleria since 1930 but a significant cultural presence in the city since the nineteenth century.

“In Milan, we spent most of the time inside the great and magnificent Loggia, or Galleria, or whatever it’s called. Edifices formed by tall and sumptuous new structures…this is the Galleria. I'd like to live there forever.”   Mark Twain, ‘A Tramp Abroad’ 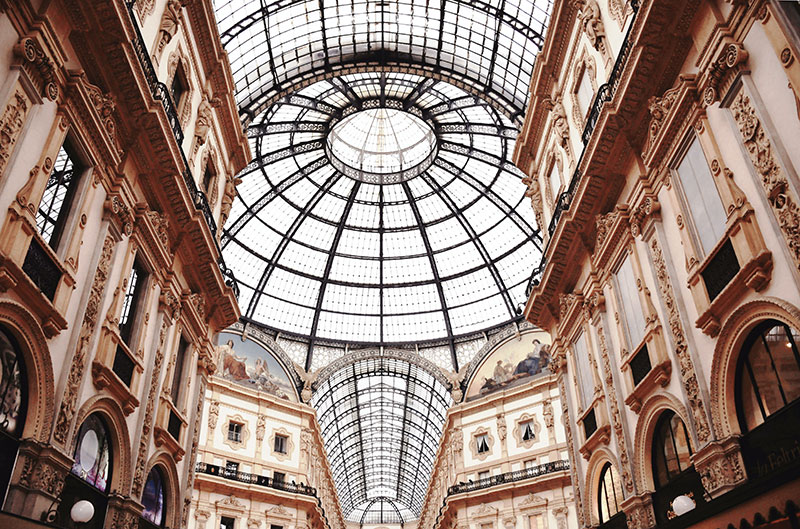 Every home has its own living room, a place to welcome guests, the best room in the house. Milano has its own grand “drawing room” as well, this magnificent nineteenth-century Galleria.  Taking a stroll in the Galleria is a popular pastime and is a way of entering the heart of the city, something the Milanese feel intensely: lingering and meeting people is definitely de rigueur in this splendid covered arcade linking the Duomo to Teatro alla Scala. It was designed as a porticoed passageway that immediately became a showcase for high-end shopkeepers, the place for a leisurely socializing walk and an aperitif or a relaxed dinner after the Opera.

You can also stroll on the Gallery roof walkways to appreciate the wonderful panorama over Piazza del Duomo and the city and to get a better idea of the massive proportions of the steel and glass canopy. It is one of the 10 must-see places from which to view Milano from above.

Milan is regarded as one of the fashion capitals of the world, along with New York City, Paris, and London. Milan is synonymous with the Italian prêt-à-porter industry, as many of the most famous Italian fashion brands, such as Valentino, Gucci, Versace, Prada, Armani and Dolce & Gabbana, are headquartered in the city.

The Quadrilatero della Moda is Milano’s high-end shopping district, known all over the world. It was named after the four stylish streets that define its boundaries: via Montenapoleone, via Manzoni, via della Spiga and Corso Venezia. The district is criss-crossed with other very elegant streets such as via Borgospesso, via Santo Spirito, via Gesù, via Sant'Andrea and via Bagutta. 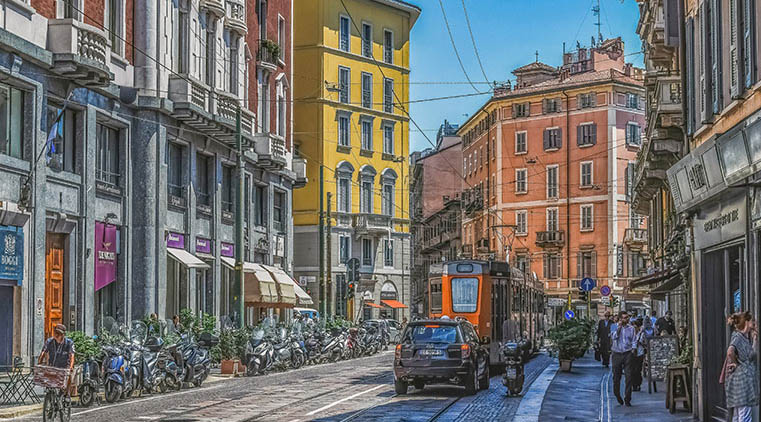 The district is a luxury shopping paradise for global visitors who come to its showrooms and boutiques to buy the latest trending items or just to browse the stunning window displays, often stunning compositions of taste and design in themselves.

If you start feeling you need some food after all this, there are plenty of historical eateries around, whether you are looking for traditional Milanese treats or just for a mouth-watering panzerotto.

Like most cities in Italy, Milan has developed its own local culinary tradition, which, as it is typical for North Italian cuisines, uses more frequently rice than pasta, butter than vegetable oil and features almost no tomato or fish. Milanese traditional dishes includes cotoletta alla milanese, a breaded veal (pork and turkey can be used) cutlet pan-fried in butter (similar to Viennese Wiener Schnitzel). Other typical dishes are cassoeula (stewed pork rib chops and sausage with Savoy cabbage), ossobuco (braised veal shank served with a condiment called gremolata), risotto alla milanese (with saffron and beef marrow), busecca (stewed tripe with beans), mondeghili (meatballs made with leftover meat fried in butter), and brasato (stewed beef or pork with wine and potatoes). 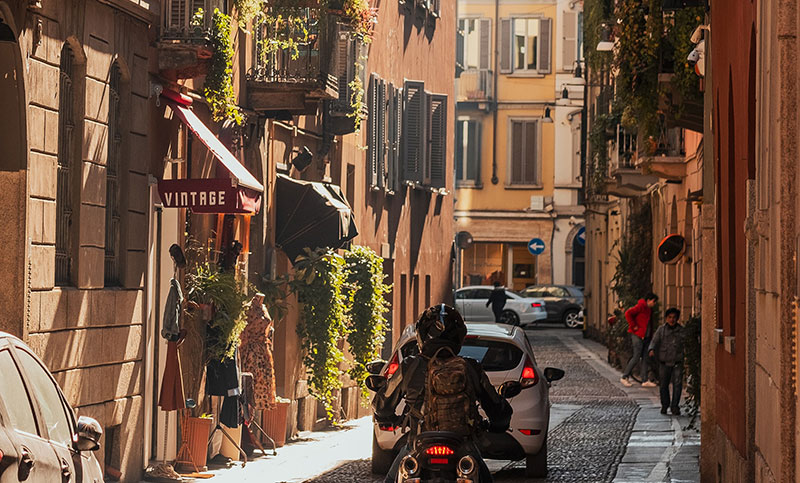 Milan is well known for its world-class restaurants and cafés, characterized by innovative cuisine and design. Milan has 157 Michelin-selected places, including three 2-Michelin-starred restaurants: Cracco, Sadler and il Luogo di Aimo e Nadia. Many historical restaurants and bars are found in the historic centre, the Brera and Navigli districts. One of the city's oldest surviving cafés, Caffè Cova, was established in 1817. In total, Milan has 15 cafés, bars and restaurants registered among the Historical Places of Italy, continuously operating for at least 70 years.

There are only few remains of the ancient Roman colony, notably the well-preserved Colonne di San Lorenzo. During the second half of the 4th century, Saint Ambrose, as bishop of Milan, had a strong influence on the layout of the city, reshaping the centre (although the cathedral and baptistery built in Roman times are now lost) and building the great basilicas at the city gates: Sant'Ambrogio, San Nazaro in Brolo, San Simpliciano and Sant'Eustorgio, which still stand, refurbished over the centuries, as some of the finest and most important churches in Milan.

In the 15th century, when the Sforza ruled the city, an old Viscontean fortress was enlarged and embellished to become the Castello Sforzesco, the seat of an elegant Renaissance court surrounded by a walled hunting park. Notable architects involved in the project included the Florentine Filarete, who was commissioned to build the high central entrance tower, and the military specialist Bartolomeo Gadio.

The alliance between Francesco Sforza and Florence's Cosimo de' Medici bore to Milan Tuscan models of Renaissance architecture, apparent in the Ospedale Maggiore and Bramante's work in the city, which includes Santa Maria presso San Satiro (a reconstruction of a small 9th-century church), the tribune of Santa Maria delle Grazie and three cloisters for Sant'Ambrogio. 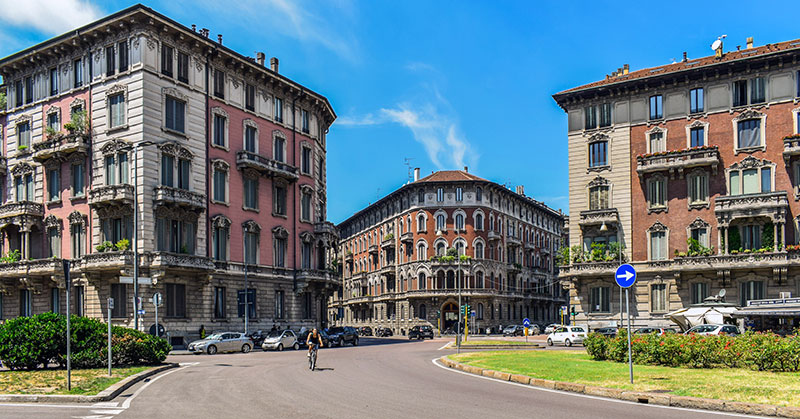 The Counter-Reformation in the 16th to 17th centuries was also the period of Spanish domination and was marked by two powerful figures: Saint Charles Borromeo and his cousin, Cardinal Federico Borromeo. Not only did they impose themselves as moral guides to the people of Milan, but they also gave a great impulse to culture, with the creation of the Biblioteca Ambrosiana, in a building designed by Francesco Maria Richini, and the nearby Pinacoteca Ambrosiana. Many notable churches and Baroque mansions were built in the city during this period by the architects, Pellegrino Tibaldi, Galeazzo Alessi and Richini himself.

Empress Maria Theresa of Austria was responsible for the significant renovations carried out in Milan during the 18th century. This urban and artistic renewal included the establishment of Teatro alla Scala, inaugurated in 1778, and the renovation of the Royal Palace. The late 1700s Palazzo Belgioioso by Giuseppe Piermarini and Royal Villa of Milan by Leopoldo Pollack, later the official residence of Austrian viceroys, are often regarded among the best examples of Neoclassical architecture in Lombardy. 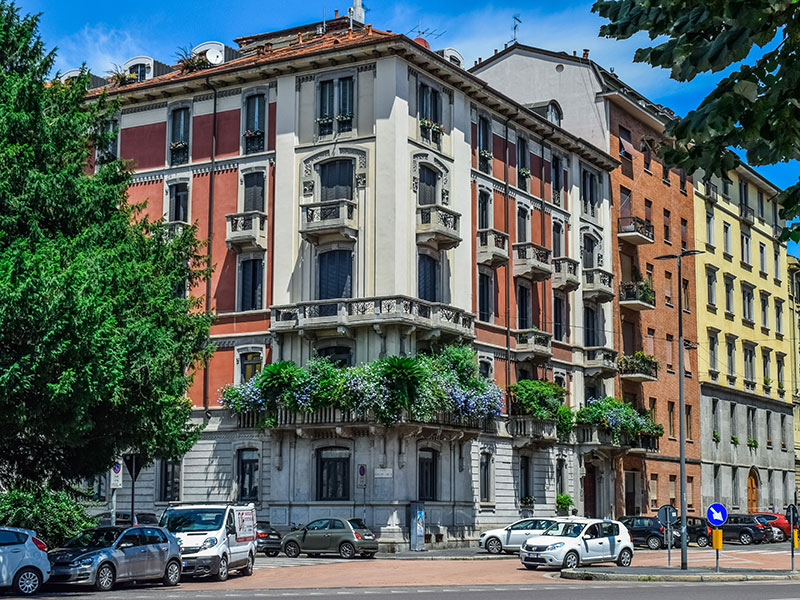 The Napoleonic rule of the city in 1805–1814, having established Milan as the capital of a satellite Kingdom of Italy, took steps in order to reshape it accordingly to its new status, with the construction of large boulevards, new squares (Porta Ticinese by Luigi Cagnola and Foro Bonaparte by Giovanni Antonio Antolini) and cultural institutions (Art Gallery and the Academy of Fine Arts).

The massive Arch of Peace, situated at the bottom of Corso Sempione, is often compared to the Arc de Triomphe in Paris. In the second half of the 19th century, Milan quickly became the main industrial centre of the new Italian nation, drawing inspiration from the great European capitals that were hubs of the Second Industrial Revolution.

The tumultuous period of early 20th century brought several, radical innovations in Milanese architecture. Art Nouveau, also known as Liberty in Italy. An important example of Art Deco, which blended such styles with Fascist architecture, is the huge Central railway station inaugurated in 1931. 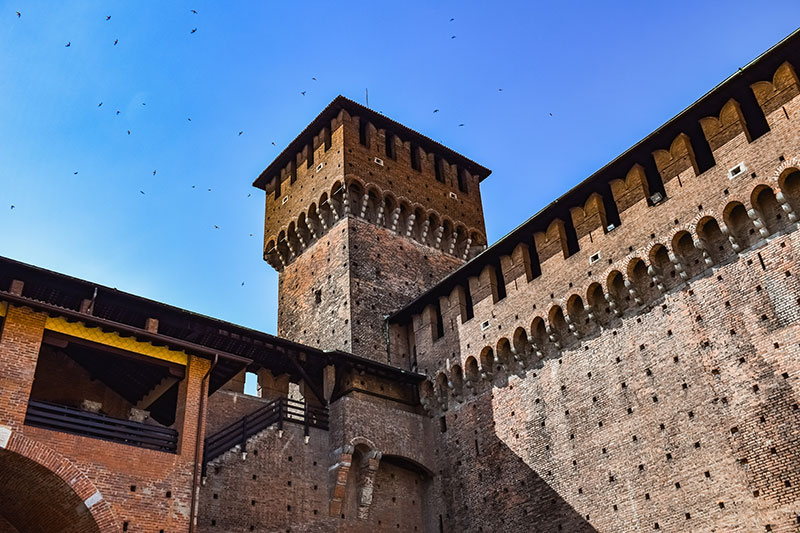 The post–World War II period saw rapid reconstruction and fast economic growth, accompanied by a nearly two-fold increase in population. In the 1950s and 1960s, a strong demand for new residential and commercial areas drove to extreme urban expansion, that has produced some of the major milestones in the city's architectural history, including Gio Ponti's Pirelli Tower (1956–60), Velasca Tower (1956–58), and the creation of brand-new residential satellite towns, as well as huge amounts of low quality public housings.

In recent years, de-industrialization, urban decay and gentrification led to a vast urban renewal of former industrial areas, that have been transformed into modern residential and financial districts, notably Porta Nuova in downtown Milan and FieraMilano in the suburb of Rho. In addition, the old exhibition area is being completely reshaped according to the Citylife regeneration project, featuring residencial areas, museums, an urban park and three skyscrapers designed by international architects, and after whom they are named: the 202-metre (663-foot) Isozaki Arata—when completed, the tallest building in Italy, the twisted Hadid Tower, and the curved Libeskind Tower. 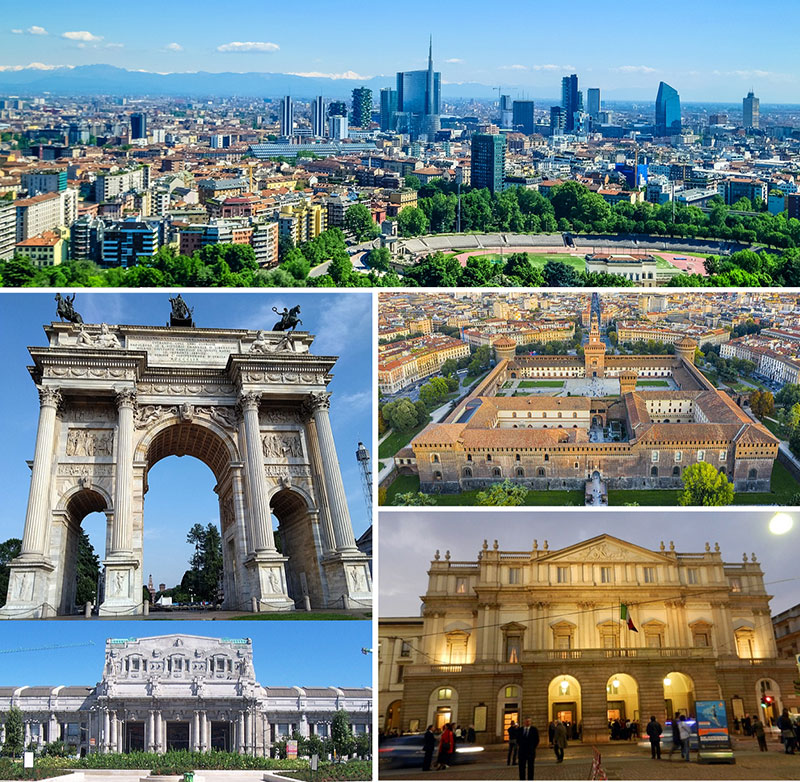